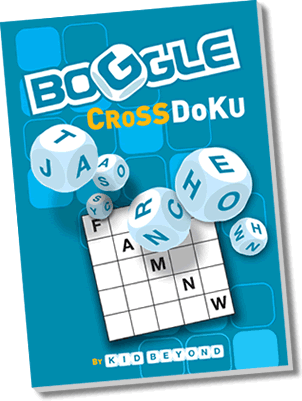 Kid Beyond is an electronic pop musician — singer, beatboxer, songwriter, producer — based in San Francisco. He has shared the stage with such artists as Keane, Imogen Heap, Lupe Fiasco, and many more. His voice and music have appeared on TV shows such as Gossip Girl, Life, Kyle XY, and VH1's Supergroup; films such as Mission Impossible III; and games such as The Sims, Spore, NBA Live and the Guitar Hero series.

An avid game and puzzle inventor since childhood, Kid B is a member of the National Puzzlers' League, and has taught at Harvard and MIT on game design. This is his first book.

For more information on Kid Beyond, see kidbeyond.com.

© 2008 Kid Beyond. All rights reserved.
CROSSDOKU is a trademark of Kid Beyond.

BOGGLE is a trademark of Hasbro and is used with permission.
© 2008 Hasbro. All rights reserved. Licensed by Hasbro.